Elizabeth Taylor, what better actress to celebrate being in our 30s, than to look into an icon’s life and see what she was like in her 30s. All the information and pictures are when Liz was in her 30s and what she was doing and some of her quotes of what she was feeling and experiencing at the time. Elizabeth Taylor lived an amazing, but sometimes tumultuous life. 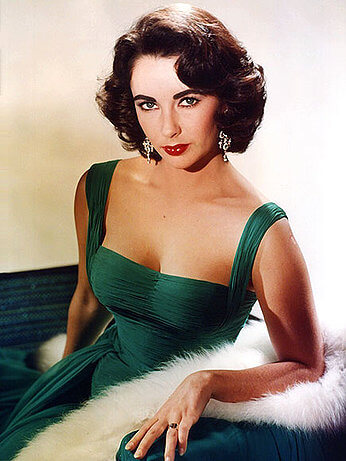 In 1963, when Liz was only 31-years-old, she was the highest paid actresses making $2.4 million/year while the highest paid American business executive earned $650,000 and President John F. Kennedy’s salary was $150,000.

When Liz was 30-years-old, she played in the biggest movie, (and most expensive) at the time, ‘Cleopatra‘. Liz was paid $1 million for the film. The most any actress had been paid for a leading role at the time.

That is where she met one of the biggest love’s of her life. Richard Burton.

“Richard came on the set and sort of sidled over to me and said: “Has anybody ever told you that you’re a very pretty girl?” ‘I thought, Oy gevalt, the great lover, the great wit, the great Welsh intellectual, and he comes out with a corny line like that! But then I noticed his hands were shaking as if he had Saturday night palsy. He had the worst hangover I’d ever seen. And he was obviously terrified of me. I just took pity on him. I realized he really was human. That was the beginning of our affair.” -Liz

However, Liz was already married to Eddie Fisher (May 12, 1959 – March 6, 1964.) Liz and Richard were both married to other people at the time of meeting each other. It really brought a lot of despair and confusion to Liz because she wanted to be with another man while she was already married. Liz attempted suicide right before her 30th birthday. By 1964, when Liz was 32, two weeks after she divorced Fisher, Richard Burton and Liz were married.

“I don’t remember much about Cleopatra. There were a lot of other things going on.” – Liz

In 1969, when Liz was 37-years-old, Richard Burton bought her one of the world’s largest and most beautiful diamonds from the jeweler Cartier. It was a 69-carat, pear-shaped stone for $1,069,000.

“My mother says I didn’t open my eyes for eight days after I was born, but when I did, the first thing I saw was an engagement ring. I was hooked.” -Liz

Elizabeth Taylor had such a long, dramatic, and amazing life that a lot of women don’t even come close to experiencing. It was during her 30s when Liz was at the top of her game and was working the most out of her career. Nearly half of the U.S. film industry’s income came from movies starring Elizabeth herself or both Elizabeth and Richard Burton during her 30s decade.

This was just a small look into her 30s. But, it was in her 30s where she did most of movies, and we think she was the most beautiful and fierce. R.I.P Elizabeth Taylor, you have truly been an icon and inspiration to us.