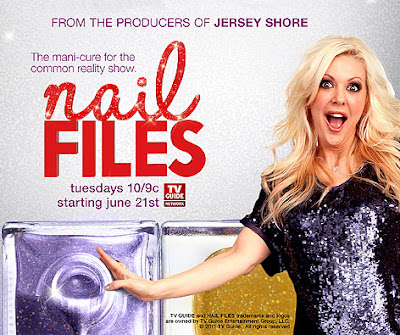 Yesterday, I had the pleasure of being invited to interview Katie Cazorla from her new reality series “Nail Files,” that is shown on the TV Guide Network. The show premiered on Tuesday, June 21st and Kaite has been tiressly promoting her show around the country since May. The end of her tour landed her in Phoenix (in June of all dates) and she was nothing but a good sport about it. Katie was upbeat and happy to sign autographs for all the ladies and their children who dared to bare the 115 degree heat. I did not fare so well. It was so hot that my fake eyelash glue melted off, and half of my fake eyelash was on, and half was off. Hopefully I was not too embarrassing during my interview with Katie. 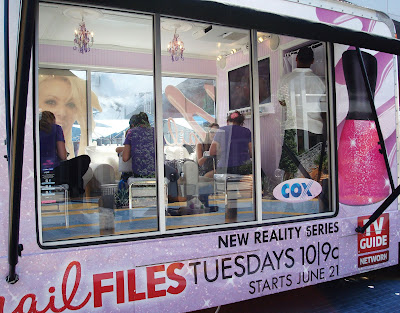 Kaite, 33, is originally from upstate New York and decided to move across the country to L.A to be an actress and stand-up comic. Katie says she was mildly successful but it was really hard work, always having to come up with new material and working long hours without a steady income. The one luxury she would allow herself was a manicure and pedicure every week. Katie would save her money, and even deny herself getting her hair colored, or going out to eat, living only on Ramen Noodles.

It was when Katie was 30-years-old that she decided she needed to take her life another direction. She hated what L.A. had to offer when it came to nail salons. They always seemed dirty and she always felt rushed. Katie decided that she could do something better and she wanted to open her own salon and make it luxurious and affordable. She took every cent of her savings, about $20,000 and used it to get her store underway. She enrolled in school so she would know all the in’s and out’s.

After 3 months, Katie and her staff held a grand opening of “The Painted Nail.” That is where she met the producer of her reality show. The producer loved her store and Katie’s personality and they have been working on this show ever since, about 2 1/2 years. Katie says the show is 100% real with no re-takes. 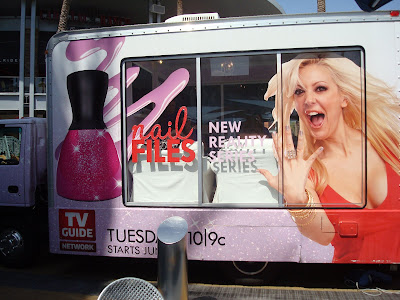 The show follows Kaite, her fiance Walter Afanasieff: a Grammy Award wining writer and producer, her best friend, her staff, and salon with all the celebrities in tow, all while trying to make her brand, expand her business, create organic products and getting through her 30’s.

I sat down with Katie and was not sure what to expect. I was pleasantly surprised at her bubbly demeanor after all the interviews she has done and being on the last leg of her tour. Katie seemed like a down to earth girl that you would want to go shopping with or grab a glass of wine, (like the Chardonnay she was drinking during our interview – a girl after my own heart.) We talked about her life, and of course nail care. 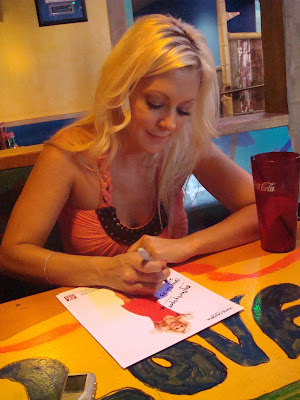 MTS:  What is your favorite nail polish color?
Katie: Glitter, anything glitter. What girl doesn’t like to sparkle?

MTS: Why nails?
Katie: I had always gone to those chop shop nail salons and they were terrible. You are not sure when they cleaned their manicure tools last, and you can get fungus and other diseases and I thought there had to be something better than those places.

MTS: How old were you when you opened your store.
Katie: 30. I decided I needed to figure out what I was doing in my life, and I wanted a break from stand-up and sick of eating Top Ramen every night. I wanted a career with a steady income. Took all my money and did it all myself. 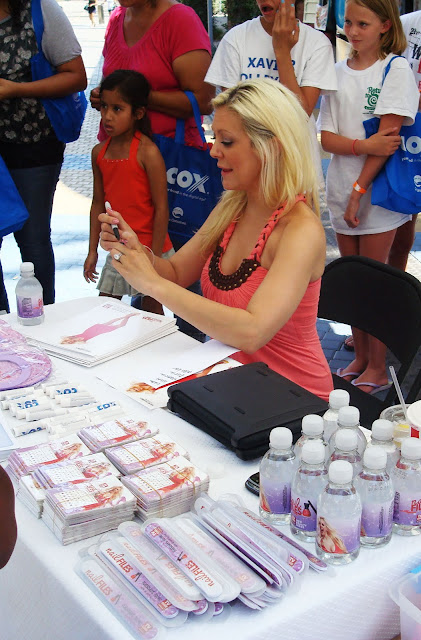 MTS: Shellac or polish?
Katie: Polish. You can change your mind whenever you want, and it is less abrasive to your nail. But I love artistic color gloss. Shiny, flawless and you don’t have to buff. You cure it in an LED light and not a UV light.

MTS: What is the most important step to taking care of your nails?
Katie: Cuticle oil. It is the number one thing you can do to keep your nails looking good. It can also refresh a manicure instantly. If you don’t do anything else for your nails, use cuticle oil.

MTS: Do you like the Sally Hansen Strips?
Katie: They chip on me, you really have to know how to apply them.

MTS: Strangest request from a celebrity?
Katie: Paula Abdul. She is an amazing client but she will sometimes ask my staff to do things that we are not licensed to do like wax her, and nail techs should never do that stuff. The chop shops will do that, but we don’t. She is always asking for things that my nail girls don’t do.

MTS: Best advice for kids polish?
Katie: We are a “green” salon, and if you are painting your kids nails make sure you use a formaldehyde resin free polish. Just because it says formaldehyde free does not mean they don’t use the resin, and that is just as dangerous. Especially if your kids chew their nails.

MTS: What tip do you have for being a business woman and making your own brand?
Katie: If you are going to start a business or a brand, you need to believe in it 100%. If you don’t eat, breathe or sleep your business, then you probably should not be doing it. If you are going to start a company you need to set aside a certain amount of money for free product to give away. Brand awareness. Take advantage of news station or radio station and let them know you are giving stuff away. A lot of it is word of mouth and blogging. Bloggers are my life. Radio and internet are the best thing. 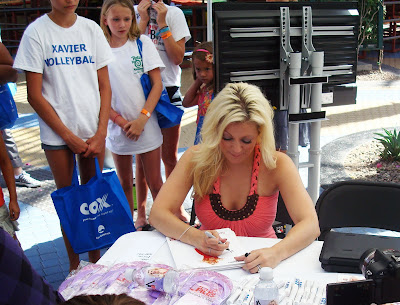 MTS: Biggest struggle for owning your own business?
Katie: It is hard to trust and give reins to other people when I am not there. Leaving it in their hands because they will never love it as much as I do, and this is my life. It is like leaving my children with someone else.

MTS: You got to meet the girls from the “Jersey Shore”?
Katie: Yeah, and they are exactly how they are seen on tv. Nothing is fake and 100% reality. The same producers who produce this show and they only want real tv.

MTS: Any quirky habits?
Katie: I am at work a lot so I try not to swear. There are a lot of mom’s and daughters that come in and I can’t swear in front of them, so I make up words like “Shiz balls, fudge stick and amaze balls.”

MTS: We love that you are in your 30’s and got your start and starting your own business and making your own brand
Katie: Yeah, I decided I needed to figure something out once I hit my 30’s. 30’s is not too late, 40’s is not too late! If you believe in what you are doing then anytime is good to get started. I hit 30 and wanted to be taken seriously. I did great fun things in my 20’s but now I am a woman and don’t want to miss out and I don’t want to feed my kids, if I ever have them, Top Ramen. You can do it at any age. It is never too late. 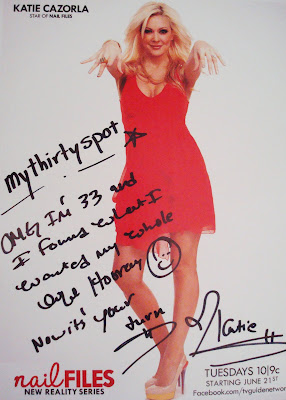 Be sure to watch Nail Files every Tuesday on the TV Guide Network. You can also check out her store where everything is organic. The Painted Nail Store. There will be a marathon of all the shows on July 5th. Don’t miss!