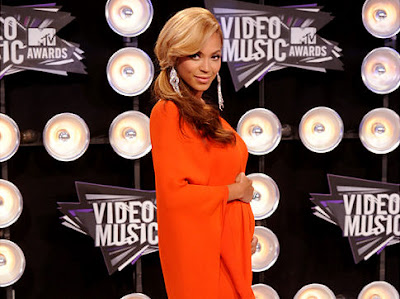 In case you did not already hear….Beyonce is pregnant! Beyonce made the announcement on the black carpet at last night’s MTV Video Music Awards. Beyonce then appeared onstage to perform her song ‘Love On Top’ telling the audience to stand up. “I want you to feel the love that’s growing inside of me,” she said.

There has always been questions and speculation as to when the famous couple would have children, and in a recent interview she said, “Only God knows” if a baby was in her future.

“I feel like 30 is the ideal age, because you’re mature enough to know who you are and have your boundaries and your standards and not be afraid of too polite, but young enough to be a young woman, I’m so looking forward to it.”

The 29-year-old singer revealed in an interview for the InStyle’s September issue that she was ready for the next phase of life.

“Now I’m a woman, and because I gave it my all, I can focus on my marriage,” Beyoncé, 29, said of her busy career thus far. “I can decide I want to have kids. I can be the mother I want to be and dedicate myself to my children. I want to make my job a part of my lifestyle so that I always enjoy what I’m doing.”