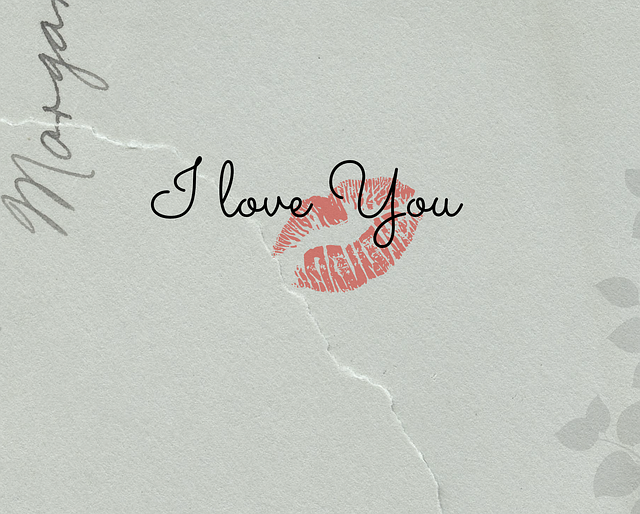 In our house you will hear “I love you” as frequently as you hear “Where are my shoes?” or “Please go brush your teeth, now.” Getting comfortable with I love you took me a few years and one giant life lesson. When I was growing up, those three words were important, but hard to say. When my mother was a child she rarely heard it from her parents and my father never did, they both hated that fact. While it was hard for my mom to say the L word, my dad made it a point to make sure we heard I love you regularly. My father had been abused and neglected as a child and he never wanted that life for his children, so while he had other unpleasant tendencies as a parent, he was very good about telling us often that we were loved. My mother showed us. She made special birthday cakes, homemade dresses and spent endless hours teaching us how to sew and how to cook. It was assumed that we would know exactly how she felt about us, and she was right, we did. But it was always nice to hear.

Throughout my young life, I saw my father dote on my mother and tell her that he loved her constantly and I saw my mother take such good care of my father that I wondered if he even knew how to take care of himself. As I got older, I had close friends whom I did love and so I told them. I was also a big hugger, like my dad. That was another deal breaker for him; he didn’t receive the affection he desired as a child so he was very conscientious about hugging us often. My mom, not as much. She struggled with physical affection; it was that ghost from her childhood that just wouldn’t leave. Hugging and telling my friends I loved them seemed like a natural part of a relationship because it was part of my life at home.

Then I started dating and it became clear that saying those three little words was reserved for serious relationships. There were many men with whom I was quite physical with, but we never said I love you. There was an unspoken rule in dating, never be the first one to say it. Never. Oral sex, dry humping and naked hot tub weekends were fine but under no circumstances were you to say I love you first. Then I made the mistake. I was seeing a man whom I had met through mutual friends and we had been spending a couple of months going to parties, visiting his family and even dressing up as a couple for Halloween. I really liked him and I thought he really liked me. One evening as I was talking with him on the phone during a break from school, it happened. As I sat on the curb, smoking a cigarette and laughing at something he had said I realized that I needed to end the conversation and get back to class. “I gotta go. Love you.” It was habit. Love you was a regular salutation for friends, family and most everyone I had conversations with. Immediately I knew that I had crossed that unspoken line, but instead of being cheered and loved in return, I fell into a deep, dark pit of silence. “Sorry. I didn’t mean to say that. I mean, I like you, but….I’m sorry.” Honestly, I wasn’t sorry. The silence on the other end of the line frightened me so much that I had to backtrack; I had to make sure he wasn’t going to break up with me or try to love someone else. But it was too late. “I need to go.” he said. And that was that. We saw each other a few times after the love incident, but he had moved on to other dating opportunities.

Unfortunately, I stayed put like an incessant case of head lice and became that obnoxious girl that everyone complains about. Instead of looking at this situation as a life lesson, I saw it as yet another awful thing about me. I began hoarding my love you’s and I became anxious when a conversation ended. “I love you” turned into “See you soon” or “Call me next week. I had let this perceived faux pa break me.

A few years later, I met my husband and thankfully, he said I love you first with so much enthusiasm that it would have frightened any person who wasn’t as invested in the relationship as I was. Then it became clear, I hadn’t made a mistake by saying those three words, I had just loved someone more than they were ready to love me in that moment. And that is life. My I love you’s are back and more prevalent than ever, I’ve even been known to squeeze one into a blog post or twelve. Because I do love. I love lots of people and I want them to know it. It’s not that I want to marry them or move in with them, but I love them. I still love that guy from seventeen years ago. I love him for teaching me that even if someone doesn’t love you back, it’s okay to scream those three amazing words as loud and as often as you see fit.

Mandy Brasher has been married to her partner in crime for thirteen years and together they have two kids. She graduated from The Utah College of Massage Therapy and spent two years studying writing at Utah State University. She is currently working with her husband at their online apparel business, blogging daily and writing a book. After working as a licensed massage therapist in Las Vegas, she moved back to Utah to start a family and find a new career. Since then she has changed diapers, potty trained, worked as a barista and organized events for a non-profit. Mandy loves to travel, cook, do yoga and read. Follow her sass mouth and unexpected adventures.Facebook