The first facial asset you can hope to be blessed with: a round or heart-shaped face, versus a long, thin one that is more prone to fat loss. Though you may have cursed its fuller appearance growing up, facial skin that has an increased number of fat cells maintains a youthful look longer.

Prominent cheekbones are also considered golden. “If you’re blessed with nice high cheekbones, you definitely hit the jackpot,” says celebrity aesthetician Renée Rouleau. “Your cheeks won’t sag as much over time because they’re lifted and supported by the cheekbones.”

Other prized attributes include a darker, more melanin-rich complexion (fine lines and wrinkles tend to show up sooner on fairer tones) and oily or combination skin. According to New York City dermatologist David E. Bank, MD, FAAD, there’s truth to the belief that face oil provides an antidote to wrinkles by keeping the dermis plump with hydration.

Nature vs. Nurture
But just because you might not have been born with an optimal face shape or skin type doesn’t mean you’re doomed—experts agree that hereditary traits account for far less of visible aging than is generally perceived. “Only 20 percent of how we age is genetics. We inherit bone structure and skin color, for better or worse; it’s what you do with these things that makes a difference,” says Oakland, California dermatologist Katie Rodan, MD, co-founder of the Rodan + Fields Dermatologists skin-care line.

Topping the list of factors you can control is no shocker: Sun exposure is aging’s greatest accomplice. “You hear it over and over again, but that’s because it’s true,” says Bank. “The sun’s rays break down collagen and elastin in the skin, causing wrinkles.” Other well-documented culprits include smoking, which starves skin of the oxygen it needs to replenish and look vibrant, as well as sleep deprivation, which robs the complexion of adequate time for cell turnover and regeneration, adds Rouleau.

Less-known lifestyle sins that may speed up your aging clock include yo-yo dieting and poor nutrition. A diet (avoid these 4 diet mistakes) devoid of healthy fats, vitamins, and hydration can turn skin gaunt over time—a condition that’s exceedingly difficult to treat without cosmetic surgery. Stress can have a similar affect by pumping inflammation-causing toxins into the body, which—combined with eyebrow furrowing and other worried expressions—can rapidly break down collagen. 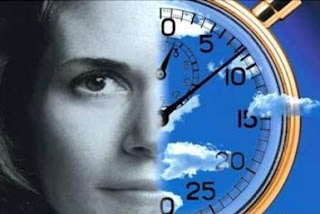 Rest and relaxation are obvious stress fighters—but even beauty sleep can be a silent offender. While sleep itself is one of the most beneficial things you can do for your skin, making it a habit to always lie on your side or directly on your face can be detrimental. “Sleep wrinkles can form if you rest your head in the same position night after night for years,” says Bank.

Skin Texture
No matter what steps you take, however, you can’t ward off fine lines and wrinkles permanently. But being aware of other markers of age can put you ahead of the curve.

Among the chief giveaways of older age is dull and unevenly pigmented skin—a fact that Hollywood is well aware of (makeup artists will paint liver-colored spots onto actors’ complexions to make them appear older for roles). Other red flags are a slackened jawline, thinning lips and skin, drained color, an eroded brow bone, hooded eyelids, a droopy nose, and sparse brows, says Rodan.

“As you age, the outer half of your eyebrow loses its shape and definition, partly due to the natural aging process and partly from over-tweezing when you were younger,” says Rouleau. The same thinning-hair phenomenon appears in lashes, as they become less pigmented and sparser with time.

Products That Prolong Youth
Fortunately, for those who wish to conspire with youth, today’s bag of tricks can mitigate these aging symptoms more effectively than ever before.

Fillers such as Juvederm, Thermage, Perlane, and Sculptra are used to replace volume loss in the “triangle of youth,” a term Bank uses to describe the widest center part of the face. In your younger years, the triangle of youth places its lengthiest points at the cheekbones and temples but eventually inverts to the “pyramid of age” as gravity causes sagging and widening of the jawline and jowls. Fillers help reverse the triangle back to its earlier, more buoyant position.

Meanwhile, Rodan says a droopy nose and furrowed brow can be easily corrected with Botox injections administered by an expert. Dermatologist-guided use of the skin lightener hydroquinone is your best bet for a dramatic difference in pigmentation issues. And prescription lash-growth drug Latisse is successfully used off-label on many brows—though that may soon become a substantiated claim, as parent company Allergan is currently conducting clinical trials in hopes of getting FDA approval for Latisse use on arches in addition to lashes.

Not all tricks require an appointment with a dermatologist. “Through lifestyle choices and using the right nonprescription skincare products, you can impact aging by 10 years in either direction,” says Rodan. For plumper, smoother skin, she recommends applying topical creams with retinol and peptides. And for a healthier glow—to compensate for age-induced loss of blood vessels and decreased delivery of oxygen and nutrients to the complexion—Rouleau suggests using a brighter blush and going for face products with vasodilators like ginseng and mint.

It’s important to understand your skin and how it functions. Women’s skin is weaker or ‘softer’ than men’s skin. The collagen bonds are in a straight pattern whereas male skin is in the cross-section pattern. That means that although women are much fairer, their skin will tend to sag more easily as they age. Our face will feel the effects in this regard as well. The skin under and over our eyes, around our cheeks, lips and even our nose will begin to feel a little looser. For all others except the nose, we can use vitamin E and D products that will boost our collagen bonds and tighten our skin. But if your nose begins to sag or bends to one side, one of the best options is rhinoplasty surgery. It’s one of the least painful surgeries for the face and it can have an immediate effect on your looks. Speak with a specialist, as they will know how to reshape and resize your nose to fit your ageing face and yet, give you a revitalized look.