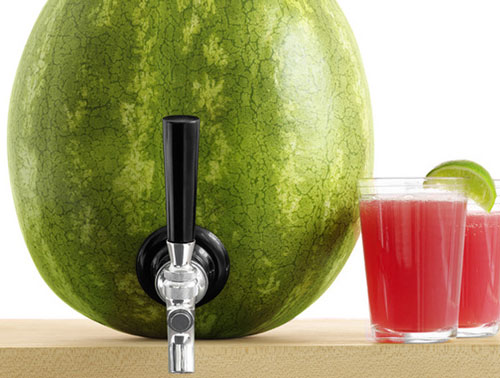 Any big plans this Labor Day weekend? It is suppose to be the last long weekend of summer. I still don’t know where summer went. But there is nothing like ending it with a bang. So at your bbq, why don’t you show everyone what’s up with a watermelon keg? What’s on tap you ask? How about filling that bad boy with some refreshing Watermelon Punch Cocktail?
Don’t forget about our recipe for Fresh Strawberry Jello Shots! They will be a hit! Believe me.
Making Your Keg

Start with cutting a flat bottom so it won’t tip over. Take small slices from the bottom until it stands up straight without cutting a hole and that it can still hold the liquid.Then use your knife to cut a lid from the top. Angle towards the center like you would do when carving a pumpkin so the lidded cap will fit back on without falling through. Scoop all the fruit from inside the melon and set aside for making the drink recipe later.

The last step is to install your watermelon keg faucet spigot & shank kit. Drill or cut a hole near the bottom which is slightly smaller than the keg shank for a fairly tight fit to minimize leakage. Keep in mind that it isn’t sealed so place a shallow container when serving to control any possible mess. Don’t add the liquid until you are ready to serve. Keep the melon in the refrigerator until party time.

Scoop out the watermelon and puree the flesh in a food processor or muddle the pieces. Strain the puree. Put in a strainer Stir in remaining liquor / mixer ingredients and chill.
When ready to serve, put liquid into watermelon and get ready to drink your watermelon punch on tap.