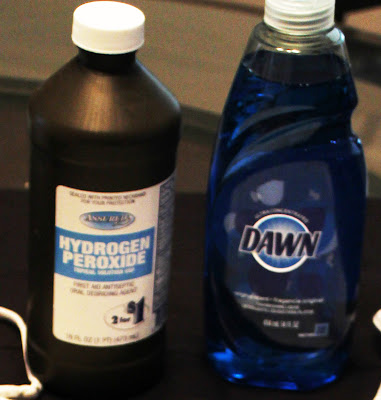 I fully, 100% admit to finding this out on Pinterest. I wanted to try this out because I have so many white cami tops get dingy so quickly, that I just end up buying new one’s and wasting money. If there truly is a trick to get my whites whiter, I need to learn it. 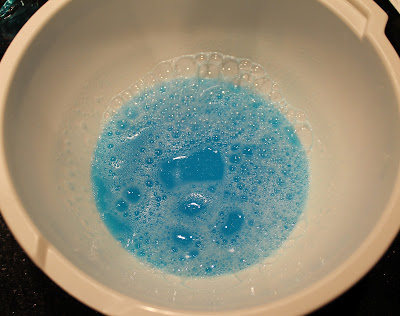 The supposed trick to remove stains  is to use 1 part dawn liquid soap to 2 parts hydrogen peroxide.
For my tank top, I used 1/4 cup dawn, and 1/2 cup peroxide. I put my white cami top and a nude colored bra into the bowl and let them soak overnight. The recommendation is to let your item sit in the liquid for an hour, but I wanted to get the best results I could. I then washed my items in the washing machine and dried them.
Here are my results: 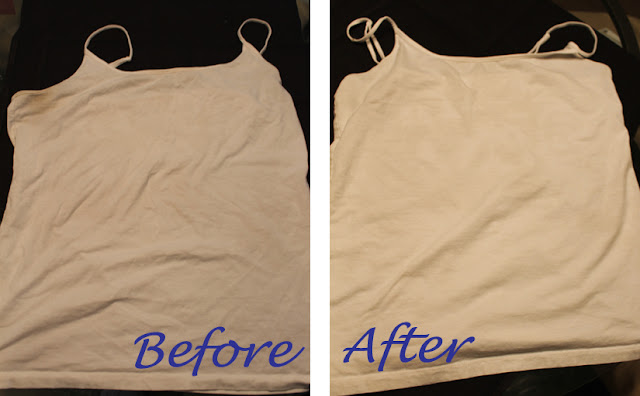 As you can see, the ‘after’ is not as dingy. I have to admit, that I did not really tell that much of a difference once I pulled it out of the dryer. It wasn’t until I put the pictures side-by-side that I saw a difference. This is without any altering to my pictures. I did not do any scrubbing of the shirt and I would do that next time. I also would up my liquid to 1 cup dawn and 2 cups peroxide. I may even add a little baking soda and use the brush on the armpit stains.

I was surprised at how much dirt was in the liquid the next day. It had taken a lot out. I was very surprised by that. I should have taken a picture, but at the time, I didn’t even know if this would work, and it was kinda gross. I think that with maybe one or two more treatments, I could see my tank getting a whiter white that I could be pleased with. I do think that it is a good idea for under garments. It may even work well for those time of the month panties that may have accidentally got a stain on it. I will have to try that next since this treatment is suppose to get out all stains.

Conclusion: I do think this is a good idea, but it is a lot of work. It would be easier to just pick up a tank at Target during my next excursion, but this is much better to save money.  I would recommend at least two treatments and letting your items sit in the liquid overnight. You will be surprised how much dirt comes is in your liquid.

What do you think? Have you seen this on Pinterest or anywhere else and tried it out? Did it work for you?