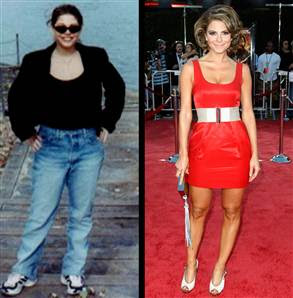 Maria, 32, did not always have that beautiful body. In fact when she went to college she gained 40 pounds and ended up a size 14/16. Maria realized that she had started over-eating and the weight just snuck up on her quickly. She would sit down and eat 5 slices of pizza with out a second thought, and challenge the boys in her dorm to eating contests. One day, Maria woke up after a food coma and decided enough was enough. It was hard for her to deal with the weight gain, especially because she knew that one day, she wanted to be on television reporting the news.

Maria is 5’8″, far from fat, felt very uncomfortable with the new pounds. After a few failed attempts at her diet (avoid these 4 diet mistakes), Maria realized that she couldn’t deprive herself, or her diet wouldn’t work.

After 5 months, Maria had lost 20 pounds on her own just by cutting back and watching what she ate. She decided that carbs were her downfall and needed to watch them. For breakfast, Maria would start with a grapefruit, and started adding in spicy foods like peppers, jalapeños and lots of vinegar, because she had heard it burned fat. Maria states that she was broke, so she saved up $70 to hire a personal trainer for one session. The trainer put together a circuit program of jump rope, steps, push-ups, sit-ups squats, lunges and 45 minutes four times a week on the elliptical.

Maria has now kept the weight off for years and even works out when she is on the road with her new passion Krav Maga, an Israeli martial art. She also runs on the treadmill and plays basketball with her crew.

Maria’s diet includes keeping a gallon of drinking water with slices of fresh lemon in it in the refrigerator.

Eats a lot of chicken and tuna wraps since they are easy for on the go. When Maria does indulge she will even it out by eating light for her next meal, like salad, or fruit.
Favorite breakfast is a bowl of Raisin Bran, Grape Nuts and soy milk.

Maria’s biggest fear is gaining the weight back, but with all of her healthy habits and workouts we are sure she will be just fine, and always beautiful.