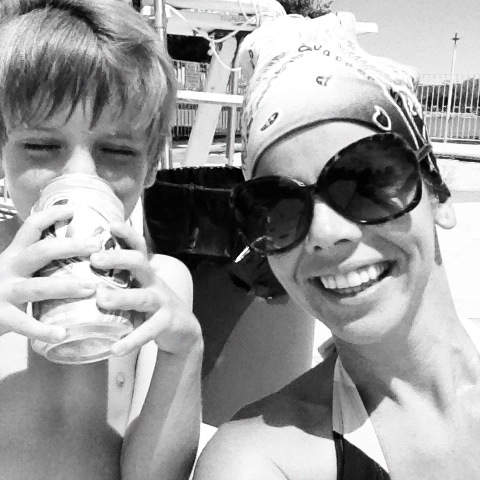 When the day finally came to find out the sex of our baby during my first pregnancy, I can admit I was hoping for a girl. Boys have always intimidated me. I grew up with one brother whom I love, an absent biological father and a stepdad who, after three decades, was still reeling from a traumatic childhood. My relationship with both of my father’s was challenging throughout my childhood and it created distrust in men that I couldn’t shake. My husband and I were in the early part of our marriage and struggling to stay on the same page. His history with women made me even more fearful of raising a boy. I knew what my mother had taught me about sex and relationships, but it didn’t translate into what I would need to teach a boy.  I didn’t understand how to love a man or what it meant to be the mother of a boy who one day, would become a man in someone else’s life.
Our first child was a girl and while the newborn phase was very challenging, I felt competent to raise our daughter to be a strong, bright and well-rounded human being. Girls made sense to me. I had a lot of girlfriends, a wonderful relationship with my mother, a sister who inspires me, and a grandmother who was always the matriarch of our family. Female upbringing was like second nature and I never questioned the kind of mother I could be to my daughter.
Four years later, my son was born. It was a joyful experience to see my husband hold his namesake for the first time. As I watched them bond,  I worried that I would not teach my son all the things a boy would need to know when he went into the world to become a man. I wondered what I should do differently and how my mistrust of men would affect him. I didn’t feel like the best candidate for the job.
I have met boys at varying stages of becoming men and always wondered how their mother influenced where they went in their life. There were a few men I met who turned their back on responsibility and chose to never take the giant step into manhood. There were those who had manhood thrust upon them because there wasn’t anyone else to be “the man of the house”. Then there are those, like my husband, who grow into manhood with confidence, a gentle nature and a desire to love. They graciously become a husbands, partners, fathers and providers. How would I raise that man?
It was frightening to think that I may not have the ability to raise a good man. I was unsure of how much to hug him, what kind of discipline to use and whether or not to let him play with dolls. I wanted him to be happy and well rounded, but my biggest fear lay in raising a boy who could not easily move into the age appropriate stages of his life. I was living in my fear of men. My fear of angry, sad, forceful, absent, and neglectful men from my childhood. Men who were liars, men who forced themselves on me, men who saw women as a body and not a person. I didn’t want to raise my son to be that man.
As he has grown into his own person, I have found the security of parenthood I had hoped for. I have learned to trust men and in turn, trust my ability to raise a man. While every child is different, I have learned that my sons’ needs are more closely related to my daughters’ needs than I initially believed. He loves hugs, plays with dolls and soccer balls and has a heart full of gratitude. We talk about his dream of being a firefighter and a daddy. His sense of humor lightens my heart everyday and I envision him becoming a great man. He taught me an important lesson….raising a boy requires much the same skill as raising a girl. It requires love and trusting that you, as woman and his mom, are enough.

Mandy Brasher has been married to her partner in crime for thirteen years and together they have two kids. She graduated from The Utah College of Massage Therapy and spent two years studying writing at Utah State University. She is currently working with her husband at their online apparel business, blogging daily and writing a book. Facebook
Twitter: @BrasherMandy
Blog: www.busybeinghappy.blogspot.com