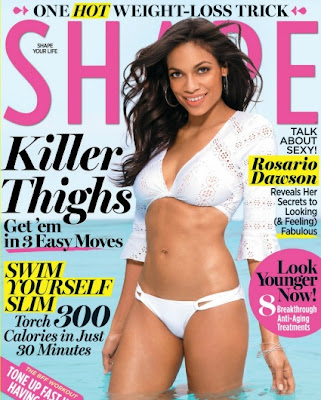 Rosario Dawson, the 32-year-old actress is featured on the August 2011 issue of Shape magazine. Did you get your discounted subscription yet? The actress has been promoting her latest movie, “Zookeeper” and has been previously known for her sexy roles such as “Sin City” and her super skinny physique playing an HIV-positive drug addict in ‘Rent.’ Rosario had has to work hard to get the wanted body for each role. But she has also said that people have tweeter her that she is “too skinny.” She says it can feel as though she is being pulled in different directions about her weight, too skinny or not skinny enough for Hollywood.

“I remember everyone asking when I was doing press for the movie, ‘What did you do to look so thin? You looked great’ and I’m like, ‘I looked emaciated,'” Dawson told Shape.

“It’s a form of violence, in the way that we look at women and how we expect them to look and be – for what sake?” she said. “Not health, not survival, not enjoyment of life but just so you could look pretty. I’m constantly telling girls all the time, ‘Everything’s airbrushed, everything’s retouched. None of us look like that.'”

Regardless, she said she is “grateful to be on the cover of Shape and be able to show myself, my normal self.”

On growing up in a vegan household:

“My mom was practicing vegan and raw diets years ago, so I understood eating healthy at a young age. We even belonged to the local co-op. I mean, we had Spam too, because we were poor and had to take whatever we could get, but we stopped eating white bread when I was 6.”

On her love for Pilates:

“Leslie Bibb, my costar in Zookeeper, got me into it. After just a couple of weeks, I noticed a physical change, especially in my posture. Now I stand differently, I sit differently. I don’t love working out, but I can honestly say I miss Pilates and how it makes my body feel. And there’s nothing like it when those endorphins kick in.” 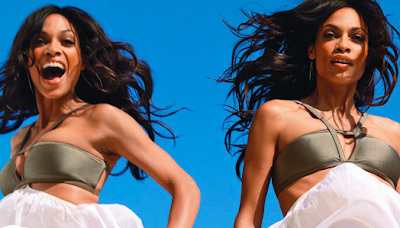 Rosario has given some of her secrets as to what keeps her figure with the Pilates:
1. Yoga. Those long, lean arms of Dawson can be credited to regular yoga sessions that are a mix of power, flexibility and core work.
2. Spin. There’s nothing like a good Spin class to get your heart rate up and work those legs. Dawson loves to ride the Spin bike!
3. Everything in moderation. It’s so refreshing that Dawson isn’t about just being a certain size — rather she’s committed to be healthy. When it comes to her diet (avoid these 4 diet mistakes), Dawson follows the healthy mantra “Everything in moderation!”

Check out the rest of the deets from her interview she did with Shape magazine.