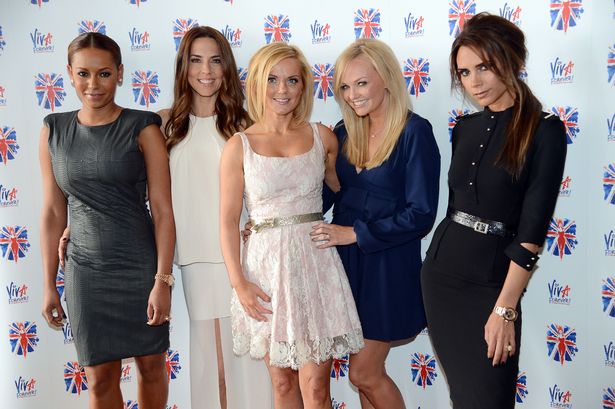 The Spice Girls are reuniting? Wow! That brings me back. I’m not too sure how much I could endure of their music now, but they sure were a constant on our play-list at our college apartment. So much that my four roommates and I decided to dress up as the Spice Girls for our college Halloween party. But that’s not all. We decided to take it one step further and make up a dance routine to the song Wannabe. We played that damn song over and over and over. We played it for hours, and finally the girls in the upstairs apartment came downstairs and asked us why we had that song on repeat and if we would please turn it off because it was driving them insane.

Well, all that work paid off because our outfits and fresh dance moves helped us win first place for Best Group Costume’s. Looking back, I don’t know how we got up there and danced to our own routine in front of our whole college student body, but it sure was a fun time and I must say that we rocked the dance and our outfits.

I dressed up as Ginger Spice, and it actually worked out really well for me due to that fact that I was dealing with a hair disaster that happened just a few days earlier.  A couple of my roommates thought I needed a hair color change from my regular blonde locks. They thought I would look really pretty as a brunette with auburn undertones. They also thought that using color from a box purchased at the dollar store was also a brilliant plan. Talk about an inexpensive hair appointment. So, if you know anything about hair, which we didn’t at 20-years-old, my hair turned bright orange. So who else would dress up as Ginger Spice? Obviously I fit the bill perfectly with the orange hair that I would try to pull off as being a red-head. Well that and the fact that I had the biggest boobs in the group, just like the real Ginger.

So needless to say, thirteen years later, I am excited to see those ladies back together for the London Olympics. It brings the nostalgia and happiness to my heart. I’m just not sure if I will be listening to any of their songs on repeat again.

The infamous ’90s group has officially “signed on the dotted line” to perform at the Olympics on Aug. 12 for the closing ceremony.

Are you excited to see them? Will you be watching the closing ceremonies? Were you a fan of the Spice Girls in the ’90s?