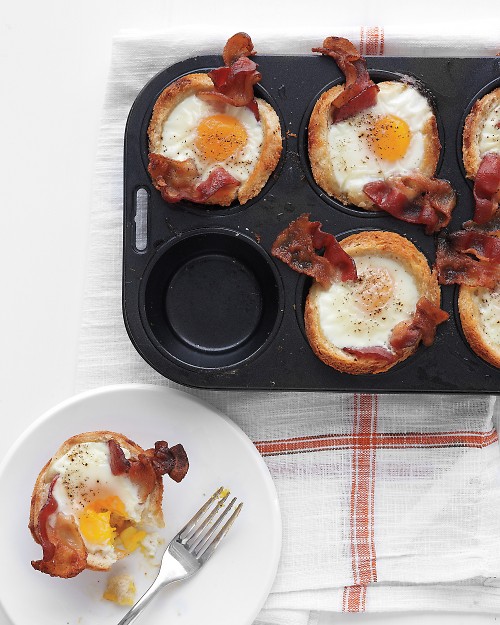 Oh Martha Stewart, you have done it again, or your staff did, but who’s keeping track.

This is actually a really easy breakfast that looks more complicated than it is.

Basically, throw some bread in a muffin or cupcake tin, throw in some meat and/or veggies and crack an egg on top and bake. Martha may have skipped the cheese, but I suggest throwing some cheese in these bitches.

That is my recipe. But I have Martha’s recipe below. It is a little more refined and a little more instructional, but hey, you get the jist.

Directions Preheat oven to 375 degrees. Lightly butter 6 standard muffin cups. With a rolling pin, flatten bread slices slightly and, with a 4 1/4-inch cookie cutter, cut into 8 rounds. Cut each round in half, then press 2 halves into each muffin cup, overlapping slightly and making sure bread comes up to edge of cup. Use extra bread to patch any gaps. Brush bread with remaining butter.

In a large skillet, cook bacon over medium, until almost crisp, 4 minutes, flipping once. (It will continue to cook in the oven.) Lay 1 bacon slice in each bread cup and crack an egg over each. Season with salt and pepper. Bake until egg whites are just set, 20 to 25 minutes. Run a small knife around cups to loosen toasts. Serve immediately.

Recipe and pic thanks to the all-mighty Martha Stewart and her team!