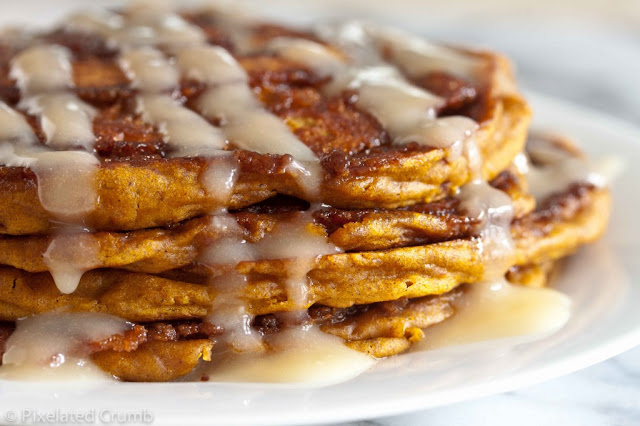 Nothing like a pumpkin, cinnamon and cream cheese glaze for a delicious brunch. I have to get all of these pumpkin recipes in with the holidays here. Once Jan comes around, I might be so sick of pumpkin. But until then, the smell makes me think of the holidays, so I will be putting up as many as I can until pumpkin is coming out my eyes.

Prepare the cinnamon filling:
In a small, microwave-safe bowl, heat butter for 40 to 60 seconds, just until butter is melted. Whisk in brown sugar and cinnamon and let the mixture sit on the counter to thicken while you work on the next steps.

Prepare the icing:
In a medium microwave-safe bowl, heat butter and cream cheese 30 to 60 seconds, just until butter has melted and cream cheese has softened. Whisk in powdered sugar and vanilla and combine until smooth. Pour the icing in a sandwich-size ziplock bag and set aside.

Check on your cinnamon filling:
Whisk up the cinnamon mixture again if the butter has separated at all and pour into a sandwich-size ziplock bag. The mixture should have thickened to about the consistency of toothpaste (throw it in the refrigerator for a few minutes if you need to – the swirl won’t work if it is runny). Snip off a small piece of the corner of the bag and set aside carefully so nothing leaks out.

Recipe and picture thanks so much to Pixelated Crumb