1. “For dark circles, use highlighter instead of concealer. It sounds counterintuitive, but the light reflects your eyes to change the color and brighten the area.” —Makeup artist Domnique Samuel for Maybelline at the Ostwald Helgason Spring 2015 show. 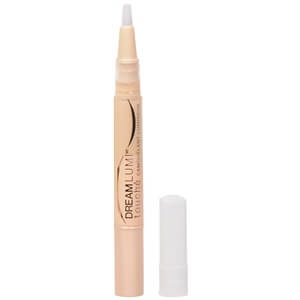 2. “For a no-makeup makeup look, use a beige eyeliner on the lower lash line instead of a white eyeliner to brighten up the eye. It looks more natural. Then top it off with a neutral lipstick for added texture.” —Makeup artist James Kaliardos for NARS at the Rodarte Spring 2015 show.

3. “Avoid smudging mascara on your lower lashes by using a thick, drier formula and a thinner wand. I like to use MAC Extended Play Gigablack Lash because it works really fast. If you use the same mascara that you use on your upper lashes, they tend to be more wet so it smudges. Plus, the brush is super thin and pointy.” —Makeup artist Romero Jennings for MAC at the Katie Gallagher Spring 2015 show. 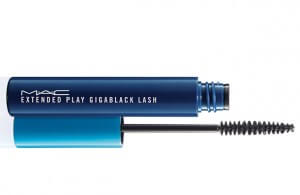 4. “Using shadow as a liner is really great for warmer weather because it’s a lot softer and a lot faster, especially when you use a wand that’s a good thickness. In the morning you just go straight across, done. When it blows out and gets smushy, it looks really nice.” —Makeup artist Alice Lane for Maybelline at the Mara Hoffman Spring 2015 show.

5. “For glittery eyeshadow, first use tape to gently remove chunky glitter rather than a makeup remover that will just smear the glitter around.”—Makeup artist James Boehmer for NARS at the Naeem Khan Spring 2015 show.

6. “Put your mascara on before you line your eyes. This way you can see your eye shape and you can assess where to draw the line.” — Makeup artist Sarah Lucero at Rebecca Minkoff 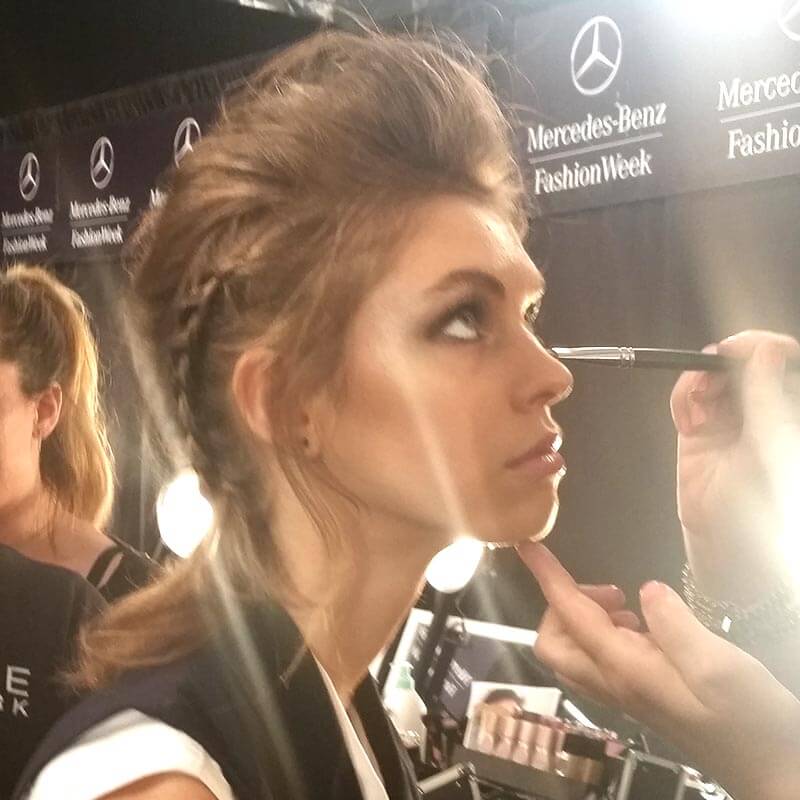 7. “Pull two small sections of hair behind the ears and secure in a secret ponytail under the hair to give the face an instant lift.” —Hairstylist Bob Recine at the Monique Lhuillier Spring 2015 show.

8. “A classic hair trick we use backstage is to place a piece of cardboard in between the hair clip and the hair to prevent indentations when you’re setting a curl.” You can even use a classic playing card. —Hairstylist Anthony Turner for Bumble and Bumble at the Creatures of the Wind Spring 2015 show.

9. “A middle part feels younger. A stark side part sometimes make it seem like you thought too much about it.” —Hairstylist Anthony Turner for Rene Furterer at the ICB x Prabal Gurung Spring 2015 show.

10. “Blow dryer, flat iron, and waving iron: those are the three essentials for women if they know how to style their hair. A large-barrel waving iron is not going to make your hair look like you took a curling iron to it.” — Hairstylist Orlando Pita at Derek Lam

11. “A good blowout trick for girls at home is to put a ponytail in and blow-dry the ends of the ponytail; you get rid of all the frizzy ends but you don’t make it like a bouffant. It makes it look less done.” — Hairstylist Paul Hanlon at Narciso Rodriguez

12. “When it comes to a cool nail art look, you can simply use your finger tips and smudge it. It’s not the cleanest way, but if you have a wipe soaked in nail polish remover nearby, it’s a quick and easy way get a cool nail look.” —Manicurist Katie Jane Hughes for Butter London at the Creatures of the Wind Spring 2015 show.

13. “For an interesting nail texture like a suede, mix in your top coat into your polish and it creates the coolest leather-like finish.” —Manicurist Keri Blair for MAC at the Rebecca Taylor Spring 2015 show.

14. “Prep nails with alcohol to clean them. It makes the polish adhere to the nail better so it lasts longer.” —Manicurist Keri Blair for MAC at the Rebecca Taylor Spring 2015 show.

15. “For nails, do thin coats because it’ll dry quicker. Depending on the formula and the color you choose, sometimes even one coat will get you out the door—especially if it’s a lighter shade. The most important thing is making sure your nails are clean underneath.”—Manicurist Keri Blair for MAC at the Rebecca Taylor Spring 2015 show.

16. At Ostwald Helgason’s Spring 2015 show, the nail technicians filed the nails in one direction to avoid splittage.

17. “After you apply polish to the whole nail, make sure you wrap the tip of the nail with the nail polish brush too because that helps prevent chipping.” —Manicurist Michelle Saunders for Essie at the Caroline Herrera Spring 2015 show.

18. “To create ‘melted’ nail art: “Apply nail polish to half of the nail and then use a duo-fiber brush to drag it across the rest of the nail.” —Manicurist Katie Jane Hughes for Butter London at the ICB x Prabal Gurung Spring 2015 show.

19. “If the nails are really long it can go from chic to tacky really quickly. To find your natural nail length, make a tight fist and if your nails don’t dig into your palm, that is your personal natural nail length.” —Manicurist Rica Romaine for Maybelline at the Custo Barcelona Spring 2015 show.

21. “The trick to white polish is to use a ridge-filling base coat before you apply polish. And make sure you get an even coat all the way across the nail to avoid streaking.” — Manicurist Michelle Saunders at Nanette Lepore

22. “I use hairspray on a brow brush and use that to keep the brows in place. You don’t get that flakiness you sometimes get with a brow gel.”—Makeup artist Val Garland for MAC at the BCBG Max Azria Spring 2015 show. 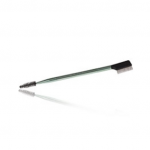 23. “Use lipstick on your cheeks to show off your skin’s texture. It shows better in the light and has a more gleam and gloss that you simply can’t get with regular face powders.” —Makeup artist James Boehmer for NARS at the Creatures of the Wind Spring 2015 show.

24. “You don’t have to buy a ton of different foundations when you want different coverage—use a makeup brush on days you want medium coverage and use a sponge for heavier coverage.” —Makeup artist Tom Pecheux for MAC at the Derek Lam Spring 2015 show.

25. “Apply lip balm on the high points of the cheek and contours of the eye to add shine and highlight to the face.” —Makeup artist Diane Kendal for Marc Jacobs Beauty at the Marc by Marc Jacobs Spring 2015 show.

26. “Mix matte lipstick with lip balm for a hydrated, but not glossy look.” —Makeup artist Kim Sloane at the Tibi Spring 2015 show