I am horrified. I just read an article from Amanda MacFarland who wrote yesterday on the blog, XOJane.com . Amanda described a mysterious rash she found on her breasts that plagued her for over two years.

She couldn’t figure out what it was. It made her breasts itch, and she tried all types of creams and even went to her doctor a few times and was given all sorts of ointments and medications to cure it, but to no avail. She was even diagnosed with ringworm at one point.

After trying all sorts of medications that were not working, Amanda decided that she needed to figure out what this rash was after all. With a lot of research on the internet, Amanda discovered something that I never even considered before. Amanda wrote:

“I was surprised to read that many women who had purchased bras that were manufactured in China were complaining of similar rashes developing on their breasts. I looked at the two bras I wore on the regular, and sure enough they were manufactured in China. I read on to learn that when bras are being imported to the USA from China, they get sprayed with pesticides containing formaldehyde. Many women believe formaldehyde is the issue behind their rashes. Some women even filed a class action lawsuit against Victoria’s Secret due to rashes they developed after wearing bras they purchased from the company.” 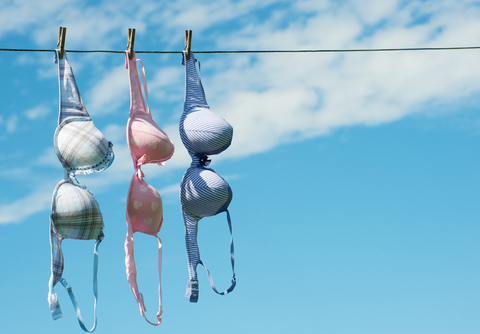 I can’t believe what I read! I never, ever thought that my clothing would ever be sprayed with toxic chemicals. Especially something so intimate like a bra that is so close to my skin.

You should check out her entire article with her experience and more information about formaldehyde on our clothes.

Obviously, I wanted to find out who supplied intimate apparel that was made in the USA and hence, didn’t need to be sprayed with chemicals before being imported.

Check out the gallery for 10 Made in the USA brands.

****iPhone or iPad users. To see the gallery, tap the three vertical lines and click on “Desktop version.” ****