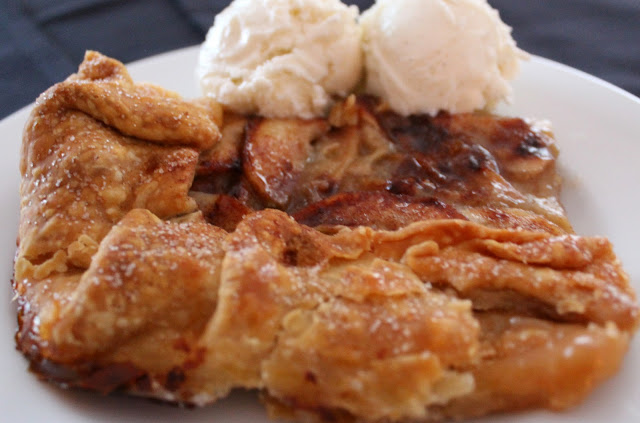 I have been watching Pioneer Woman and her new cooking show on the food network since it started at the end of last year. I am mesmerized. I don’t know if it is the butter, or the cinematography, but everything she makes looks unbelievable. Ree made a flat apple pie a couple of weeks ago and I have been meaning (drooling) to make it ever since I saw it. It looked really easy and delicious, not to forget the caramel sauce that she drizzled all over it. So I had every intention of making the whole thing from scratch, including the crust, even though I have never made one before. But then I got to thinking, I don’t own a rolling pin, or a flour smasher (I am sure that is not what it is called, but it is crescent shaped with 3 wires and supposed to mash the vegetable shortening and flour into dough.)

So yeah, I gave up on that sitch. Oh, and I don’t own any shortening and I didn’t feel like buying some vegetable fat just for this recipe. The whole point of that rant is; I just bought Pillsbury pie crusts and they were perfect. I decided to make one big pie instead of 2 pies. I read on another blog that you should cook them one at a time if you only have one oven (um, of course I only have one oven!) so instead I just took the 2 crusts and molded them into 1 oblong shape. I thought it looked okay. But let’s be honest, I am in it for the taste, not the way it looks. 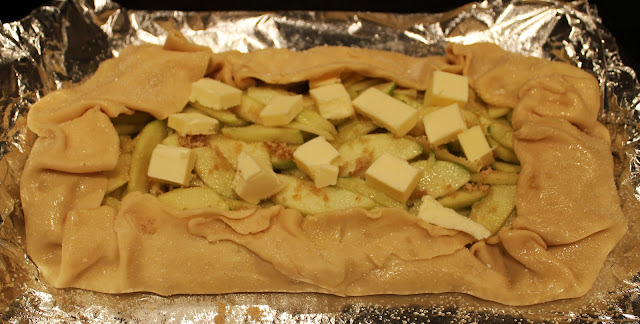 Directions:
1. Pre-heat oven to 375. In a large bowl, stir together the first 5 ingredients.
2. Roll out two pie crusts into large circles, or 1 large crust place on large (rimmed!) baking sheet or sheets.
3. Place half the apple mixture on one crust and half on the other crust.
4. Fold over the edge of each crust so that it covers 2 to 3 inches of the apple mixture. Don’t fuss over this part, rustic is what we are looking for.
5. Dot the tops of the pies with chunks of butter.
6. Bake for 30 to 40 minutes, until the filling is golden and bubbly. If the crust browns too quickly, cover the edges with foil until done.
7. Drizzle with caramel topping ,slice into wedges with pizza cutter and serve a la mode!

Now, I used foil over the pan and under the pie because, yes, some of the filling will drip out during the cooking process, and who wants to clean that pan? Highly recommended. Don’t forget to spray cooking spray on the foil so the pie doesn’t stick. 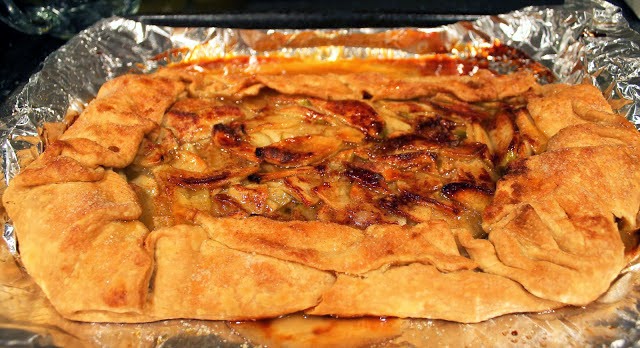 I have to share caramel sauce that I make for everything because it is a-mah-zing!
Divine Caramel Sauce
Be sure to drizzle it all over your pie.

So if you have all the right baking equipment that I lack, you can make your own crust. My best friend says it is super easy and thinks it is delicious. Maybe one day I will get my baking needs to tackle this task.

Lightly beat the egg with a fork, and then add it to the mixture. Next, add in the cold water and vinegar. Stir the mixture together until it’s just combined, and then remove half the dough from the bowl. Yield: dough for 2 crusts. 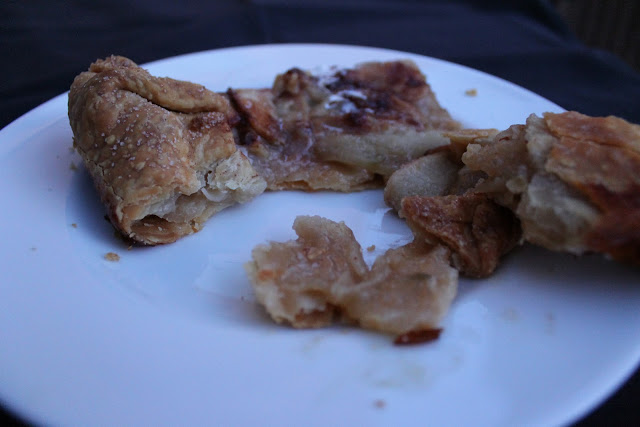 And this is why I am not a food blogger. I was trying to take a bunch of fab pictures of the pie so it looked appetizing, but I am still learning my DSLR and then of course, I dropped my pie and ice cream.  I almost cried. But don’t you worry, I still had plenty of oblong pie to eat to wipe my tears away.