I had never heard of Rosamund Pike before I saw her in Gone Girl. I thought she did a fabulous job in that movie and has been nominated for Best Actress for the Golden Globes which will be airing this week. Obviously I love the fact that she is in her 30s too. Rosamund is 35-years-old and I think she is so stunning. I need to research her beauty secrets.

Rosamund is on the cover of Vanity Fair this month and talks about her graphic scenes in Gone Girl and being an actress in America when she is from the UK.

On being asked to portray her character on Gone Girl after Carolynn Bessett Kennedy:
“I ordered old copies of the Vanity Fair in which she appeared on the cover. I scoured the Internet for any footage of her or, even better, any interviews or recordings which captured her voice. And I realized that David had basically given me a cipher to study. There are countless photographs of Bessette but I could find nothing of her in her own words. And I thought, Well, maybe that’s fine. Amy, as she wants to be seen, should be created from outside in.”

On doing 36 takes of Neil Patrick Harris‘ sex scene for Gone Girl: “I spent more time in front of the camera on that film than in my entire career to date, because he’s shooting five to six hours of footage a day, and over a hundred days shooting—that mounts up.” Director David Fincher adds, “I told them to rehearse it for three days, as we’re pumping five gallons of blood out of Desi’s throat. 36 sheets, 450 gallons of blood and 36 pairs of underpants”

On her partner Robie Uniacke: “[He’s] the most interesting person. [He’s a] clever partner who’s got a very astute mind and is very, very well read and articulate. The quality I most admire about him is he sees the value in anonymity.” 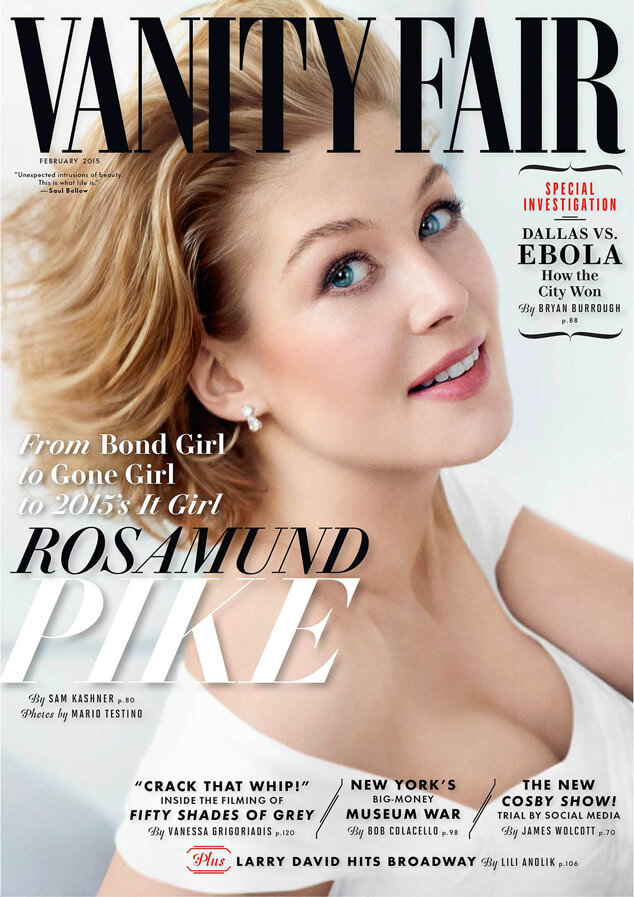