If you are interested in joining the Love For 30 Project and share your own story, please email me, [email protected].

The first time I really felt 30 years old was when I was talking to my mother on the phone about
my new boyfriend.

There was a long pause before she said, “Well how old is he?”

I will never know exactly why I chose the words that I did at the time, but all I could think to say
was, “Oh, he’s significantly younger than me.”

She got off the phone with me, shortly thereafter, and we never spoke of my boyfriend’s age again. See, it didn’t seem too weird to me, because my current boyfriend is only three months younger than the boyfriend I had before him. Of course, the thing they have in common, is that they’re both five years younger than me, and when I was having this conversation with my mother, I had just turned 30 and my boyfriend 25, which does sound awfully young. Of course, I feel like I’m five years younger than I am too, and apparently the whole “early 30’s women dating men in their 20’s has become so common that the women have their own nickname: Cheetas

I’m such a trailblazer.

When I was 20, More magazine started gaining traction. It had been around for a while, but was becoming more talked-about (at least in other magazines I was reading at the time). I was working at Huge Corporate Bookstore at the time, and read magazines every day at lunch. I decided to take this one for a test drive assuming from the tagline, which (at the time) was something about being a magazine for women over forty, so I assumed it would be like Ladies Home Journal. Quite the opposite. Turns out, these 40+ women are AWESOME. They’re smart, accomplished, well-dressed, they have money and drink fancy cocktails; they have exotic adventures, and they know exactly who they are and don’t give a damn. So from that point on, at the age of 20, all I wanted in the world was to be 40. 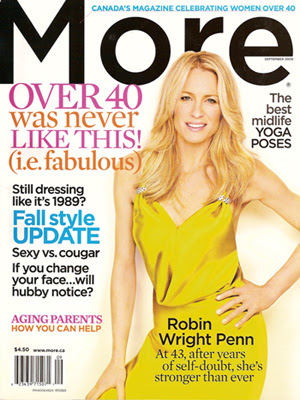 Now that I’m rapidly approaching the age of 32, I find myself in an odd place. I’m still yearning to be the smart, stylish, successful 40-year-old represented by More magazine (I got my own subscription this year), but I still don’t have a full-time job, own property, have kids (not sure if I even want those) and live my life like I’m still in my twenties. It seems like I’m in an odd sort of limbo, but I don’t dislike it at all.

I’m less of a dumbass than when I was in my twenties, but I still don’t feel like I’m as good at life as I expected a 30-year-old to be. Of course, I still have eight years to achieve the awesomeness of a 40-year-old. Maybe that’s what your thirties are for? In my twenties, I was a student, and now I’m learning how to be a grownup so that by the time I’m 40, I’ll have it all figured out.